(Many thanks to Shlomo Katanka for his input)

Byron Jacobs was the eldest child of Harry Braham Jacobs and Clara nee Samuel. He was born in the Hendon area of London towards the end of 1889. His father was a dealer of various sorts – unfortunately he doesn’t feature in any of the UK census after the age of 11.
Byron had a brother, David and two sisters, Nora and Grace.
Sometime before 1895 the family emigrated to South Africa and ended up in Bulawayo where Harry was a Stock Broker.
It is assumed that his parents, Clara and Harry, were divorced, because Clara’s subsequent marriage to Nathaniel Platnauer in 1899 was conducted by a Rabbi.  The marriage takes place in Bulawayo where the Jacobs were living.

The Platnauers start a family of their own, having three daughters Joyce, Gloria and Natalie, all appear to have been born in Lichtenburg, South Africa.

We that Harry continued to live in Bulawayo and operated as a Stock Broker.

From photographs we know that Byron and his siblings kept in touch, at least, with their mother. Unfortunately we have no details of whether or not they were living with her and her new family. A Platnauer family photo of 1906 taken in Lichtenburg shows Clara with all her children, both Jacobs and Platnauer.

In February 1916 he travelled from Durban to London on the RMS Saxon, travelling 2nd class and gives his occupation as Electrician, aged 25 and from the Transvall.

By mid 1916 Byron has ‘joined up’. When he actually enlisted is uncertain. Originally he was a Lieutenant in the Defence Forces of South Africa but transferred to the East Kent Regiment (The Buffs) in March 1916  but also served with the Royal Flying Corps (RFC). This probably accounts for some of the confusion around the details.

In November of 1916, whilst a Lieutenant in the East Kent Regiment – Special Reserves, he is awarded the Military Cross for conspicuous gallantry, having taken command when his senior officer was wounded. He took command of the company and continued the attack.
Somewhere along the way he is also awarded a bar to the Military Cross. His military record refers to both the MC and the bar at the same time.
In 1917 he became one of the first Jewish members of the Royal Flying Corps (RFC) and was a scout pilot.
In September 1918 he crashed the Sopwith Camel he was flying and was injured. He struck and air pocket close to the ground while diving on ground target and struck ground. According to his military record he spends the rest of the war in hospital as a result, being discharged from hospital in January 1919.

He is dispersed independently in March 1919 and then transferred to the Unemployed List in April.

As to his rank at the end of World War I, we have a bit of confusion. I only have part of his military record (many of WW1 records were destroyed). In one record he is referred to as Lieutenant but I suspect that this an out of date entry.

However we know that he is mentioned as a witness at the inquest into the death of Lieutenant William Rhodes-Barnett in Eastbourne in 1918. In the publication he is listed as Captain Byron Jacobs. Additionally, he gets his Competitors Certificate from the Royal Aero Club in 1918 as Capt. in The Buffs.

Sometime after his demobilisation he returns to South Africa. A photograph of the Platnauer family dated 1919 shows him in uniform.

In September 1921 he returns to the UK from South Africa on the SS Balmoral Castle. His age is given as 29 but no occupation is listed, but we do get a destination address of 4 Parsifal Gardens, Hampstead.

Everything goes a bit quiet now and we have no information.
In 1932 Byron marries Evelyn Mary Sayer in London. Unfortunately we know very little about Evelyn that can be confirmed.

When the 2nd World War starts, Byron is back in the services. However, his rank seems to be in a state of flux:

9th April 1940 he is gazetted as 2nd Lieutenant. He is listed as Captain Jacobs,late the Buffs.

This smacks to me of the British military doing its own strange thing. He was a Captain but left The Buffs so they are bringing him back in at the bottom so that he can be promoted.

Within the army there is a matter of seniority (based on start date in a given rank). So I suspect that this is simply a way of getting things in the right order?

In 1945 Byron is made an OBE for Meritorious Service. 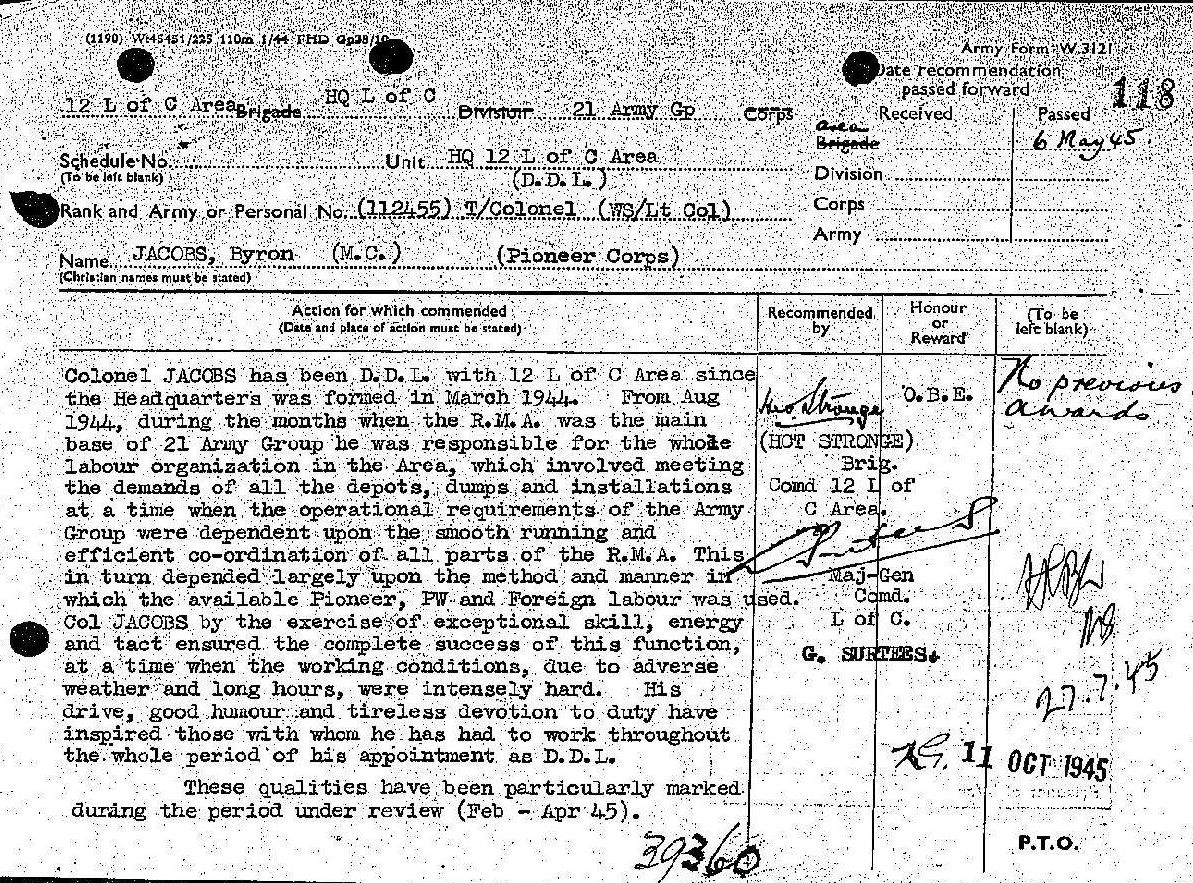 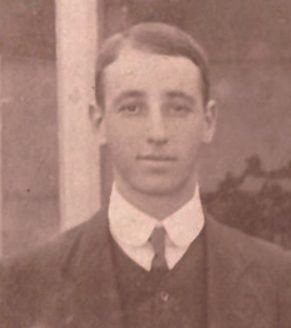 In October 1947 Byron and Evelyn travel back from South Africa on the SS Capetown Castle. His age is given as 57 and hers as 45. Their address is c/o South Africa House and his occupation is ‘Director’.

We have two photographs (1940 & 1961) showing him with a lady called ‘Jo’ but we don’t know who she is. There was a thought that ‘Jo’ might be his step-sister Joyce, but looking at contemporary photographs of both women seems to contradict that.

I have found two obituaries for him, the most informative being in the Jewish Chronicle of Jan 31st 1969. [Note it was the O.B.E, not C.B.E that was awarded]

Colonel Byron Jacobs, who died last week at the age of 79, was for over 20 years the chairman of the Ex Service (1943) Association, the organisation of refugees from Nazi persecution – most of them Jews – who volunteered for service in H.M. Forces during the Second World War.
A descendant of a family which arrived in this country from Germany during the second half of eighteenth century, Byron Jacobs was born in London. He served as an officer throughout the First World War and was he was decorated with the Military Cross and bar

In 1917 he became one of the first Jewish members of the Royal Flying Corps in which he was a scout pilot.

His association with the then “alien” members of the British Forces started in December 1939 when he was posted from the Reserve to Richborough Camp, the training centre of the British Pioneers. He was promoted to major and commanded one of the ” alien ” Pioneer Companies. When the war ended he was a full colonel and deputy director of labour and he was appointed CBE in 1945.
In the same year, immediately after demobilisation, he took over the chairmanship of the Ex-Service (1943) Association, and he had occupied that post – with the exception of a three years’ stay in South Africa ever since.

It is possible that his wife, Evelyn, died in Brighton in 1983 aged 85