Gerry Newnham has done some research on Matilda:-

As you know Henry and Ellen had 11 children and this screen shot shows the family and the main dates: 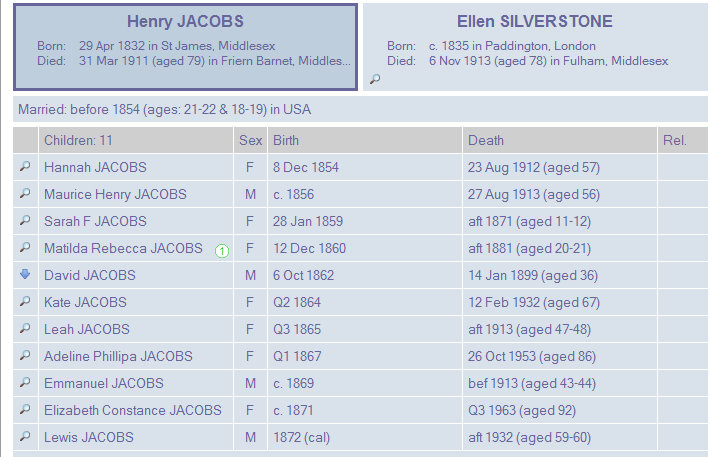 Hannah and Maurice, David and Kate, Adeline and Elizabeth are fairly well recorded and don’t present any particular issues.

So I have been focussing on the remaining children and this note relates to Matilda Rebecca.

In the image above the green number “1” is a hint by MyHeritage suggesting a family tree that has her marrying a Charles Price. I have contacted the tree owner for further information but haven’t had a reply so far. My own researches suggest a completely different and much more intriguing story.

There is a Matilda of the right age and born in Sussex living with a Reginald Hugall in Moreland Street, St Lukes (just off City Road) in the 1891 Census: This is the transcript:

The Census image doesn’t reveal where in Sussex Matilda claims to be born. There is no record of any marriage for a Reginald Hugall so Matilda’s maiden name is an open question. He dies in Q1 1893 in Islington. On 28 Feb 1894 she (“Widow of Reginald”) is admitted to the Camberwell Workhouse with her youngest daughter, Ellen, having been removed from St Mary, Islington. But both of them are discharged the same day on her “Own request on refusing to remain”. She is admitted again to Camberwell Workhouse on 17 June 1898 and dies there in childbirth 2 days later. Her unnamed male child also dies. The GRO index entry for her death gives her name as Matilda Rebecca Hugall.

Since Reginald had died in 1893 he couldn’t have been the father of the child born in 1898. Perhaps the birth certificate will throw some light on this.

Now, you would have thought that if she was born in Sussex Matilda’s Settlement would have been there. Equally, if she had actually been married to Reginald she would have gained his settlement – Holborn/Islington or even, possibly, Yorkshire where he was born. So why was she Removed from Islington to Camberwell?

When the Jacobs family moved from Brighton back to London they are recorded as living at 37 Treherne Road, Brixton in the 1881 Census but then at 46 Shepardess Walk, Hoxton in the 1891 Census. Although not in the same Parish, Treherne Road is close to the Camberwell parish boundary and it is possible that the family lived at other addresses in South London and possibly also in Camberwell. Matilda Rebecca was still with her mother, living at 37 Treherne Road in 1881.

The two sons – Reginald and Philip – were taken in by Bernardos and were eventually sent to Canada, both in 1894, although on different ships. Philip enlisted in the Canadian Army and died in France in 1918. Reginald, having married in Canada, moved to the USA in 1923 with his wife, Mary,  and three boys – Harold, Teddy and Victor. He died in Macomb, Michigan in 1953.

In 1901 Ellen, Matilda’s fourth child, is in Camberwell Workhouse and in 1911 working in Berwick Street, Soho. Note that she was named  Ellen – the same name as Matilda Rebecca’s mother. There is no birth registration for her or the other children, except for the unnamed child born in 1898.

Now, to the clincher: In the 1901 Census, Matilda’s third child, Sadie, was living with her aunt, Elizabeth Constance Jacobs (see first image) – now married to James Carlisle – in Fulham: 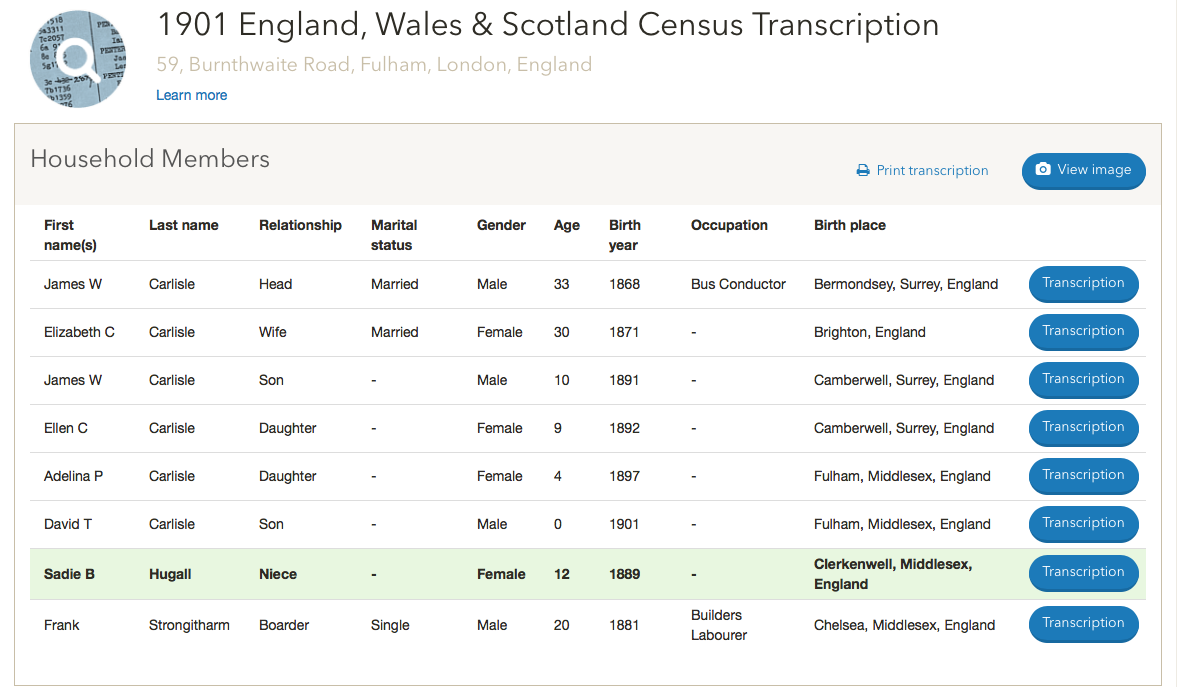 So that seems to resolve what happened to Matilda Rebecca and a very sad tale it is. Obviously there is much more work to be done and eventually I would hope to link up with any surviving descendants. I will press ahead with researching this family and also with the other children and report any further discoveries.

Any comments would be welcomed and please feel free to pass on to any other family members.